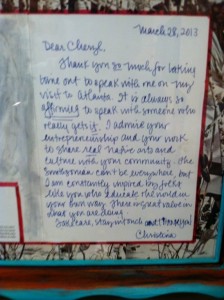 Christina Berube from the National Museum of the American Indian came to visit me and my store today.   She was here in Atlanta to meet with members and since I am a charter member, I was one she wanted to see.  She had no idea that I owned Seven Arrows so I was very excited to show her the store.  We had a great visit.  She admired  the authenticity of the  items  I sell and my desire to teach my community the true history of the American Indians. We also talked quite a bit about the museum and how they could better represent the American Indians.  She did tell me that they are working on a new American history curriculum for the public school system that would be from the Natives side.   How exciting!    I told her about when Lee and I attended the opening of the museum and were actually in the procession that walked up the mall to the Capital.  We were with the American Indian art and craft association of which I’m a member, so we followed after all the tribes as support people.  That was an exciting day. I loved talking and sharing our experiences with the American Indians ( how much nicer it was to work with them) and about the ignorance of most Americans about our Native peoples.

(Most people think that the Native Americans should still live like they did in the 18th and 19th centuries, while everyone else in the world can progress What is up with that?)

Anyway, she was probably one of the most exciting visitors I have had.  Following is the note she sent me after her visit.    Just about to launch Seven Arrows new website! Woot! Cheryl Anne Smith West has been a joy to work with!