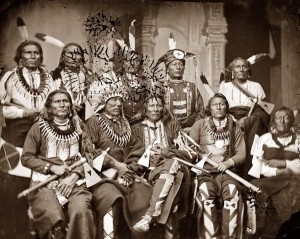 Who are Native Americans?

Today, every citizen of the United States is an American.  The country is full of people whose ancestors came from around the world looking for opportunity.  But, before the arrival of outside people, what we call the United States was already the home of many societies of people.  Hundreds of thousands of Native Americans lived across this country, and their descendants still live and thrive here today.  But, who are they and where do they live?

Native Americans are also called First Americans, because they were the first humans to populate the Americas, crossing the continent as far back as 15,000 years ago.  They spread into different regions of the Americas and developed ways of life that fit in with their surroundings.  Some stayed in one place and farmed the land, some wandered and hunted their lands.  But, no matter where they ended up, they built up complex myths, traditions, and artwork that symbolized their unique way of life.

Today, there are over 500 Native American tribes in the United States.  Tribes are spread across the country, but the largest and some of the most well-known tribes are located in Oklahoma and the Southwestern part of the country.  Among them are the Navajo, Hopi, Zuni, Pueblo, Apache, just to name a few.  These are people who were hunters and gatherers and farmers, and prospered in societies full of rich traditions.  Having been forced onto reservations during the westward expansion of the nineteenth century, most of these tribal people had to struggle to survive on undesirable land.  This tragic history of separation and isolation affects many members of tribes today.

Many traditional elders among the Navajo struggle today in remote areas of their reservation.  They maintain traditional lifestyles, as their ancestors did thousands of years before them, but are in need of materials to help them survive.  An organization called Adopt-a-Native-Elder Program provides survival basics for the elders, such as food, medicines, fabric and yarn.  The program is supported by fellow Navajo and those from the outside world, and creates a bridge between the two cultures.

Cheryl West supports such bridge building through Seven Arrows Art Gallery, and through charitable support of the Adopt-an-Elder Program.  She also builds bridges as a charter member of the National Museum of the American Indian, by whom she was honored two years ago.  With the support of like-minded people, Native Americans are beginning to prosper and still maintain their rich ancient cultures.